The stage is set for the biggest overclocking showdown to hit the eastern shores! Representatives from over 15 nations in Asia and Africa collide as they fight for glory in the Asian and African regional finals of the GIGABYTE Open Overclocking Championship! Witness the dangerous game played by overclockers as they fight both time and heat in an effort to achieve peak performance from Gigabyte’s components, the best that technology can offer.

On June 19, 2010 in the confines of Jakartas’ revered IT Mall, the Mangga Dua, lines will be drawn, clock speeds will be abused and the whole world will be witnesses to the boundaries that both human and technology will break. 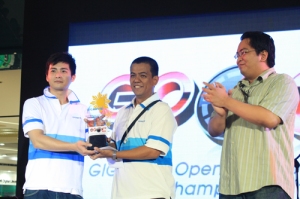 Hailing from the Philippines, Ronaldo Bejarin makes history as he is the first ever Filipino to participate the in regional finals of GOOC. Bejarin became the Philippine Champion as he won the crown in GOOC Philippines 2010 last May 21, 2010 at SM Annex. He will travel to Jakarta, Indonesia to carry the Philippine flag and along with it, the ingenuity of the Filipino people. The top 3 winners of the event will earn cash prizes, products from event sponsors and a trip to Taiwan this September 2010 for the GOOC 2010 Finals. Does he have what it takes to go neck to neck with the champions of the world? Is he worthy to be the world champion?

Show your national pride for Ronaldo Bejarin by voting for him as your choice at http://gooc2010.gigabyte.com/Asia-Africa/ and get a chance to win exciting prizes brought to you by Gigabyte!

June 19, 2010, mark that date in your calendars, as the GIGABYTE Open Overclocking Championship Asian and African Regional Finals will be an event you won’t dare to miss!